I'm so glad she's gone! Thanks Christine! I hope you make a long, long way. You deserve good things for beating out Semhar. Have you ever seen anyone so happy to be knocked out of the game of Survivor? I thought I might be the only one getting annoyed with her repeating her poetry...but even Mr. Probst (Jeff) was rolling his eyes. She did a complete rendition of her poem that I had on here a few weeks ago...I wanted to like it - I really wanted to like that poem. I wanted to like it so much I even said I liked it initially. I listened to it once more and thought...weird...there's a line in her poem where she says she doesn't care if he calls her "Shelley" because that's his mother's name and he loves her as he loves me." I thought...didn't you think about that first...? Little creepy.

Anyhow, I jump ahead of myself...before that Mikayla was trying to figure out what was going on. Brandon was so upset with himself for being like his Uncle Russell and he wanted to be a hero and he told a blatant lie...he says, "I reap what I sow, man." He loves God and Jesus Christ. That's great. Stop talking all the should game and just do (I got that from the LOML sitting here beside me during the episode).

Treemail let everyone know that two people from each tribe can go to see the Redemption Island battle. Coach asked if he could go and Stacey said she would like to go also. So, those two went from Upolu and from Savaii - Ozzy and Elyse.

As I've already stated - SEMHAR GOES HOME! She leaves a nice warm sweater for Christine - very nice move. She was so annoying...she started talking about how she felt abandoned and much like her life she has had to move around a lot. I am sure she has a really interesting and sad story...but it's Survivor and I'm happy Christine is sticking around a little bit longer. I am watching this a second time and I was so happy I could forward past the poem. I can't believe they gave her that air time. Oh well, that's probably all she really wanted. I did add to her youtube hits...I'm sure I'm not the only one. I was a little worried Christine would drop her totem, but she did not. They were holding a totem on top of a platform with a skinny stick...they would add sections after a certain amount of time and it would have been really easy to lose this challenge. I think they both tried.

L'il Hantz came clean about his relationship to Russell. Mikayla cracks me up, "You say you don't wanna lie, but you keep doing it." She didn't say that directly to him, but she should have. Coach is still on his side and wants to keep him around.

Papa Bear is on the outs with Dawn and Cochran. Ozzy came back with a nice fish. He thinks he and Keith have a brother thing going on and so he told Keith about the hidden idol and within minutes Keith told Whitney. For some reason after he told Whitney, she was rocking him back and forth on the hammock. Why? Do they have a showmance happening? That word needs to be added to Webster's Dictionary - Showmance. All she needs now is a palm frond.

Mikayla calls out Brandon and she wants to know why? She wants to know why he wants her out and why she couldn't talk to her about it. He thinks she has an attitude. He then says he's trying to apologize to her when he just got done telling her he doesn't like her. He calls the entire group over to have a conversation. He's such a dink. He points out that she doesn't have an alliance and no one said one word. What a douche bag. Brandon, you are a douche bag. You really are. And you know what? She ended up going off on her own and crying. No one followed her and no one talked to her or tried to consol her. I am not happy with the rest of the tribe either. Sophie believes him to be a devious jerk - it's in his blood line. Brandon doesn't think he should have lost his temper, but he did and it was awful. He was lying there next to fire getting covered in ashes. Maybe he will rise like that phoenix...I doubt it. Coach notes that the aggression differs from Russell's, but it is still aggression nonetheless.

For the challenge they win comfort food (coffee, cookies, sugar). They have to race along a floating bridge with a body board...collect a banner in a bag...bring it back and then some other tribe members will take a grappling hook and bring all five banner bags up to the platform...once they get them all they have to organize how they are hanging to show a picture of their tribe totem type thing....It wasn't very exciting.

Sophie is strong like bull! I love it. Papa Bear couldn't keep up...they have to real in the people on the body board after they collected the banner bag. Dawn showed lots of strength in this challenge. Brandon gave a shout out to God on his way back on the boogie board...finger point straight to the sky. :)

When Savaii got back to camp, they were sure they were going to vote out Papa Bear...it ended up being between him and Cochran. Papa Bear went for a run into the trees and tried to trick the others into believing he found the idol. Jim sort of believed him. It didn't end up helping him much, he still got voted out in the end. I believe he made some really important comments during tribal to set the stage for something pretty interesting. He mentioned to Dawn that she's in the group of three with him and Cochran and that's okay...it's Jim and the other four that should worry because they won't make it past that five mark. At least the three know where they stand in the grand scheme of things. When they showed the scenes for next week something interesting is going to come about between Jim and Cochran. I hope it's good. I hope the underdogs come together and make something cool happen. I don't know if Jim knows it or not...but he's really not part of the cool kid group...he's there simply because he's not old and he's not super nerdy. The other four are together because they are all carbon copies of each other. Cochran also pointed out the searching for a (I never know if I should use a or an before an H...see) hidden immunity idol really doesn't prove loyalty for a tribe and group cohesiveness.

Overall, this episode wasn't great. I guess it will start getting better soon. I'm hopeful for next week. :)

Favourite Quote thingy from this week: "Nervous neurotic scrambler" = Cochran...haha...okay, he doesn't want to be that guy...I think he held it together this week. 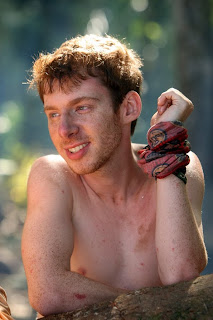