I have hopes for this week. I don't know how I could be disappointed considering last week was so friggin' boring. We'll see :) Good luck to you both Kristina and Matt.
Last week on Survivor (best Jeff Probst impression) - Russell is gone and BR is kickin' butt and has ultimate support from his tribe mates (minus Kristina and Phil). At least we got to see Russell cry again...there's something.
OMETEPE: Rain, rain, rain. Philthy has admitted that he is the odd man out...he slept right next to BR and then BR was choked because he stuck his leg right into his back (I'll leave out the blatant crude joke)...get over it. He was wearing his 'pink panties' and I think BR was just a little uncomfortable.
ZAPATERA: Spirits are high. I had no idea...Steve is an ex-NFL'er. I wonder if Grant knows  about that. He is also talking about trying to bring Kristina and Stephanie into the merge. They aren't talking about getting rid of them. They were feasting on delicious fish.
Who will go to the battle? Krista and Stephanie picked the right numbered tiles to go to the battle. Julie is saying that they are just pawns. I prefer Steve's synopsis. And then Stephanie opened up her mouth and is ready to cause damage if the other tribe wants it. BR and Grant went from the other tribe. They never showed how they chose.
THE BATTLE: Kristina and Matt - loser goes home. Puzzle pieces...collect them all and create a cube. It's a big puzzle, not just a little table...it's 3-D.
I wish I could be building it...the pieces are like Tetris. I love tetris. Matt thought he had it, but no. He didn't. Kristina was called a gladiator by Jeff. BR was being evasive. Matt asked him about why he was voted out and BR said, "It takes more than one person to vote someone out." Matt won again. I am starting to think Matt may represent the second coming of Christ (no offence). Kristina is going home. I had higher hopes for her.
This year they are really allowing us to get to know each of the Survivors.
Stephanie and Krista told Matt that if he wanted to, they were prepared to align with him if they get to the merge...which would give him his g/f on his original tribe and now Steph and Kris from the other one...that's four people in a usual ten person merge. Interesting.


Low and behold I was completely wrong about the above synopsis...crap. I thought Stephanie and Krista were going to be smarter than this. I thought they were trying to show up BR and let him know that not only did they throw the challenge to get rid of Russell because he's 'famous' - BR better watch out...Nope. I was completely wrong. They are all about finding a dude they think is going to take them all the way to the end instead of using their smarts. Damn.
When they show Phil's occupation there's a question mark after Federal Agent. OMG he has pimp shoes. Fantastic. He is reminded of crabs when he sees the girls from his tribe. Maybe he shouldn't tell them that. Andrea and Phil kind of sit on the outs. Ashley and Natalie are kind of lazy it seems. Andrea is annoyed by them. She thinks they are sweet albeit (love that word btw) superficial. Andrea wants to get rid of Ashley or Natalie before Phil. Phil is a good worker. Andrea is a good worker. Andrea is feeling it out with Phil. I hope it works out. He's good for fodder. Now, Phil has asked her if she would like to align with Matt and him. BR is a dictator and Phil the Lord. Awesome! I wonder...I wonder...I wonder...if Philthy is the Lord and Matt might be Christ incarnate - we might have a season on our hands ladies and gentlemen.
They showed one of those AWESOME cute little frogs. 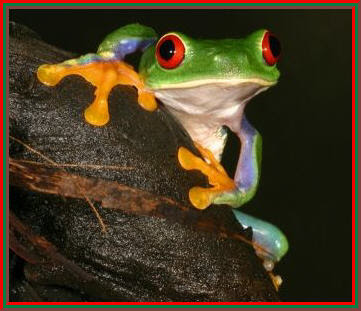 Julie is still paranoid about something coming back to haunt them because they threw that challenge two episodes ago. Time to let it go, Julie.
Challenge - Oooh, it looks like a maze. Fun! One person to direct the blind-folded rest of the tribe through a maze with bags of puzzle pieces scattered throughout. When the blind-folded people return with the puzzle pieces, the caller puts the puzzle together. They win immunity and some cheap donuts.
Stephanie is the caller for her tribe and BR for the other. David was all hurt because he feels that he could do better at the puzzle and the calling. However, Sarita believes Steph would do better because she (Stephanie) is 'bossy as all get out'.
BR's team is first to get all the puzzle bags back. Then Stephanie was right there.
SHUT UP Jeff. BR dropped a piece. Jeff said, "ONE of the best puzzle solvers in the history of this game" referring to BR. Whatever. Rob found his missing piece. Dang it. The other members of Stephanie's tribe were putting her down like crazy. "That's why David should have been there." OMETEPE won. Stephanie is probably being voted tonight to Redemption Island.
At least Phil is safe for one more week. They were losing it over donuts. Sugar is good. OOOhhhh! They got coffee too! Rob takes over everything! Grant worked with Rob and he let him go with the coffee tin so he could get the clue. I hope Grant finds out that Rob has the idol and they send BR home. He's having fun messing with Grant and everyone else. "you have to hussel if you want to make a dollar." Boston, you almost messed up there buddy! Did anyone else here it when Grant asked, "Did you find it?" and Boston said, "Ya. I mean, what do you mean?" Something along those lines anyhow. He almost blew the whole thing. So, he went and hid the new clue and gave Grant the old clue. I hope he digs himself a real deep lie hole.
They showed a turtle burying her eggs. Cool.